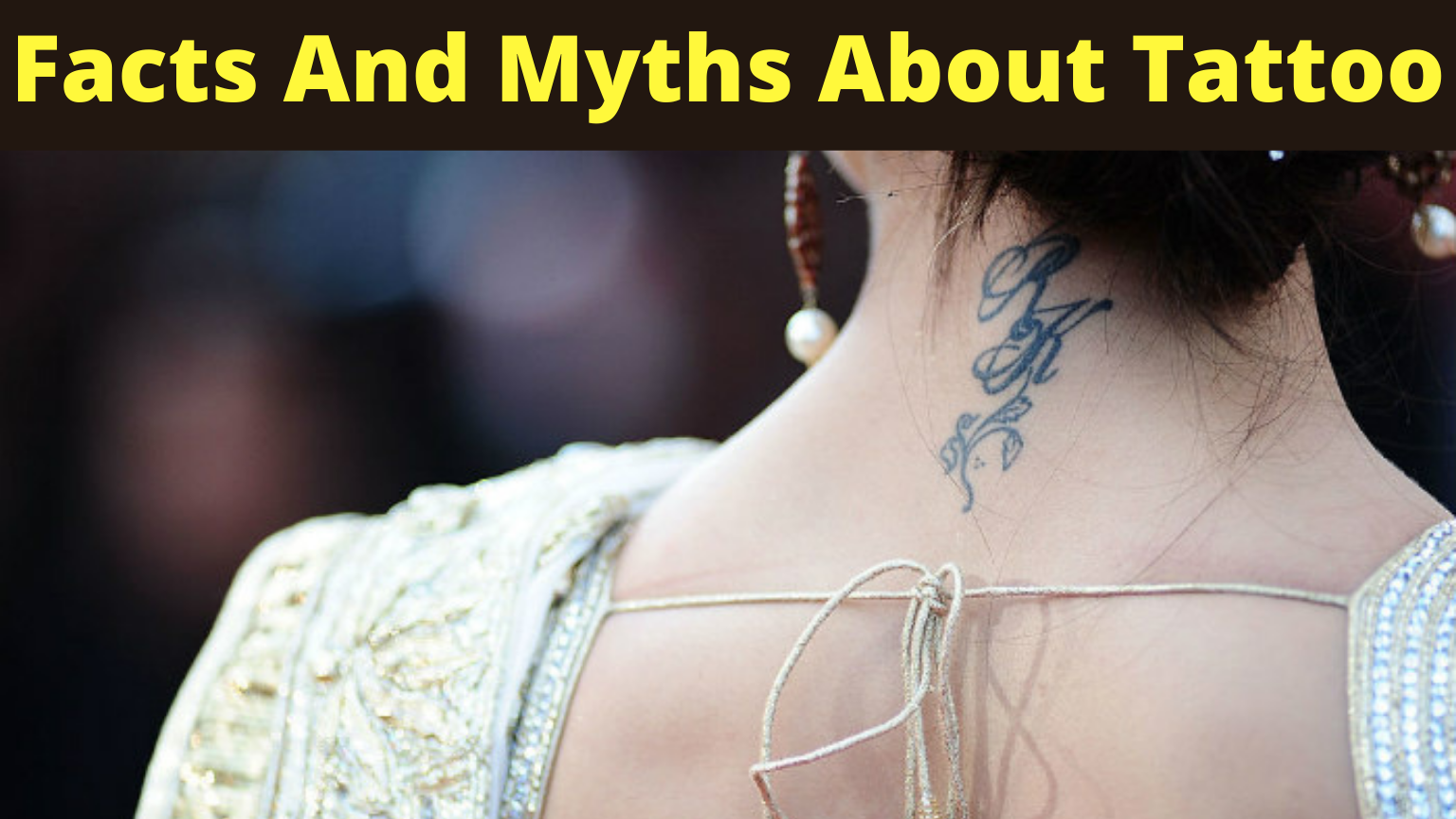 A tattoo is a type of body alteration that involves putting indelible or temporary ink, dyes, and/or pigments into the dermis layer of the skin to create a pattern. Tattooing is the art of creating tattoos.

Tattoos are classified into three types: merely ornamental (with no special purpose), symbolic (with a specific meaning relevant to the wearer), and pictorial (a depiction of a specific person or item). Furthermore, tattoos may be used to identify animals, such as ear tattoos on cattle as a type of branding.

There are some facts and myths about tattoos. Let’s discuss this here.

Myth No. 1: Lighter colors are more painful than darker ones.

In general, getting a tattoo hurts, regardless of where it is on your body. Because every one of us has a distinct pain tolerance, the sense of pain varies as well. The lighter colors are usually applied at the end when the skin is at its most vulnerable. Thus, some people perceive the lightest colors to be the most painful. With appropriate tattoo maintenance, both your dark and light-colored tattoo ink will resist fading.

This is not always the case. If you’re looking for cheap tattoos, you’ll be able to locate them. You’ll be amazed to learn that your favorite tattoo design and tattoo artist’s pricing may be within your budget. Money isn’t the issue here; it’s how eager you are to receive high-quality tattoos that will last a lifetime.

Myth #3: Only a single needle is required.

Tattoos are created by using a cluster of odd-numbered needles. It normally comes in sets of three, five, seven, or more.

Myth #4: Having your name tattooed is bad luck.

Although partnerships may succeed or fail, getting a particular name as a tattoo is a matter of personal preference and is never an indication of ill luck. Whatever the end of your relationship, you may require pain relief cream if it does not work out.

Consider Angelina Jolie and Johnny Depp. They both survived a heat break and got the names of their prior lovers tattooed on their bodies. At the time, tattoo removal lotion may have been their best friend.

Tattoos don’t have a lot of bleeding. It’s usual for blood to flow as outlines are drawn, but by 10 minutes, after shading, or by the time it’s finished, the bleeding should have stopped. The bandage will help absorb any extra blood and a topical anesthetic applied throughout the procedure. 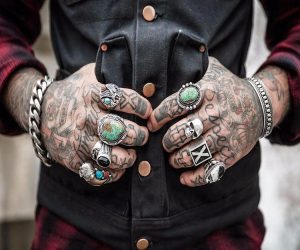 Myth #6: Anyone who can sketch can get a tattoo.

Sorry to disappoint you, but tattooing is a talent. Different painters have unique skills that they have honed through time. They are artists, and like most artists, they improve over time, but their talent does not guarantee that you will not endure tattoo discomfort.

That may have been true in the past, but advances in science and technology today allow tattoos to be removed using creams or lasers with very little or no trace, with a little help from topical anesthetic gel or other forms of anesthetic.

Myth #8: Tattoos are only worn by strong people.

When tattoo parlors were still uncontrolled, stereotyping was common. Many sailors obtained piercings and tattoos with the idea that it would keep evil spirits at bay or perhaps bring them good luck. Tattoos are now generally gotten as a result of personal preference, as a form of personal expression of art.

What do a person’s tattoos reveal about them?

Tattoos are now viewed by an increasing number of individuals as one-of-a-kind signs of uniqueness, a means to communicate what makes a person unique. In psychology, “sense of self” refers to how you perceive yourself and consider your own characteristics, beliefs, and aspirations. It’s self-awareness, but it’s not about ego.

Why are tattoos so dangerous? 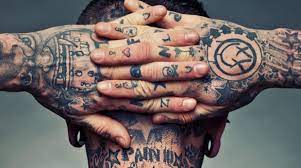 “It is the body’s response to clean the tattoo’s entry point.” Because they discovered chemical alterations in the tissue as well as inflammation, researchers discovered that tattoo ink can induce persistent swelling of the lymph nodes and lifetime exposure to these harmful molecules. When tattoo parlors were still uncontrolled, stereotyping was common. Many sailors obtained piercings and tattoos with the idea that it would keep evil spirits at bay or perhaps bring them good luck. Tattoos are now generally gotten as a result of personal preference, as a form of personal expression of art.

• It boosts the immune system

• It lowers cortisol levels in the body

• Tattoos have the potential to enhance immunization procedures.

Tattoos may be superficial, but their significance may be profound. Body art messages are an individual’s self-expression, however, there are repeating themes that can frequently reveal something about the user. Barbed wire can lead to incarceration. A crimson rose is frequently associated with romanticism.

If you have a tattoo, you cannot donate blood: (Myth)

Before getting a tattoo, drink beer or take aspirin to deal with the pain: (Myth)

Because alcohol and aspirin are blood thinners, they will induce increased bleeding during the procedure. Your body is generally proactive in limiting blood loss, but while you’re on painkillers, your blood isn’t thick enough to clot regularly. This might lead to problems with healing and color intensity.

Avoid exercising just after having a tattoo (True):

Exercises that strain or stretch your newly tattooed skin should be avoided. To prevent the danger of skin abrasion, avoid contact sports until your tattoo has completely healed. Most essential, there should be a minimum of 48 hours between having a tattoo and exercising exercise.

Tattoos on bones are more painful than typical tattoos (True):

Yes, it is correct. Actually, it hurts more when the needle pricks repeatedly over a region of thin skin and bone. However, the parts of the body with the most fat and skin function as a cushion for the needle, making it less painful. This simply implies that having a tattoo along your spine hurts more than getting one on your thigh or calf.

Don’t get any water on your tattoo (true): A new tattoo should not get moist. Wash a fresh tattoo carefully, then apply a tiny layer of lotion to keep it moist during the healing period. It’s an easy guideline to remember: protect it but don’t overdo it.

It should not be soaked or submerged in water for an extended period of time. Swimming should also be avoided throughout the recovery period.

1. According to a poll, more women than men have tattoos in the United States.

When it comes to getting tattooed, it appears that more women than men participate. According to a new study issued by the Oxygen Network and Lightspeed Research, 59 percent of women have tattoos, compared to 41 percent of males.

2. In certain civilizations, urine was used to blend tattoo colors.

Urine was occasionally mixed with coal dust to make tattoo ink because it was thought to have antibacterial characteristics.

Fortunately, the tattoo ink we frequently use is made up of pigments mixed with a carrier, with extra additives ranging from Listerine to Kettle One vodka to aid in sterilization.

Most individuals are unaware that when they get tattooed, it is not a single needle tip perforating their skin. Tattoo needles are made up of groups of needle points that are driven into the skin by a machine. This results in a staggering number of skin punctures throughout the tattooing procedure.

4. Tattoo ink is put into the second layer of skin.

When you receive a tattoo, the ink is injected straight into the dermis, or the second layer of skin. The skin atop the dermis is referred to as the “epidermis,” and it works as a transparent veil over the real tattoo.

5. Tattooing has historically been condemned by religions such as Christianity, Judaism, and Islam.

Although many global faiths have taken strong anti-tattooing views, not all have opted to condemn the practice. Tattoos have historically been used to improve spirituality in religions such as Buddhism and Hinduism, and the practice is not frowned upon.

6. The philosopher Confucius was opposed to tattooing because he taught that the human body is a gift.

Contrary to Confucius’ assertion, stone sculptures in China show males having tattoos on their faces as early as the third century BC. Although some supported the practice, many in Ancient China felt that tattoos should be used as a method of punishment to label and banish offenders.

7. The simplest color to remove from a tattoo is black.

Contrary to common belief, black is the simplest color to remove using a laser process. Because black ink absorbs the most laser pulses, it can be removed from the skin far more easily than vivid, lighter hues like green and yellow.

According to Psychology Today, a recent study showed that persons with tattoos are more likely to be “experience seekers.”

According to a recent study, people who get tattooed seek non-conforming lifestyles, adventures involving the intellect and senses, and low-risk innovative encounters.

8. According to recent research, tattooed persons have a higher desire to stand out from the crowd.

It turns out that those who choose to get tattooed may have a deeper urge than others to assert their individuality and stand out from the crowd, utilizing tattoos to identify themselves and communicate their inner ideas and unique opinions.

9. Women are more likely than males to get their tattoos erased.

According to a survey conducted at dermatology offices across many states, more women than males want to have their tattoos removed. When asked why they had opted to get rid of their tattoos, the most prevalent replies from women were societal stigma and pressure, humiliation, or a new job/career.

10. Many ladies bring a friend to their tattoo appointment.

40% of women bring a friend or loved one with them to their tattoo session, preferring to share the experience with someone they care about. See additional results from the survey.

11. The world’s most tattooed man is completely covered.

A Diamond of Fortune Rich is the person with the most tattoos on the earth. He has tattoos all over his body, including the inside of his lips, eyes, and even his foreskin!

Tattoos are an ancient art form that has been practiced for ages. Unfortunately, many stories have been shared in the profession. Because of these stories, fake information has become true.

People assume that if they get a tattoo or have spent hard-earned money on something that will fade away with time, they will be unable to participate in particular activities. We’ve dismantled the stories and debunked the falsehoods, so you can book your next tattoo session with confidence.