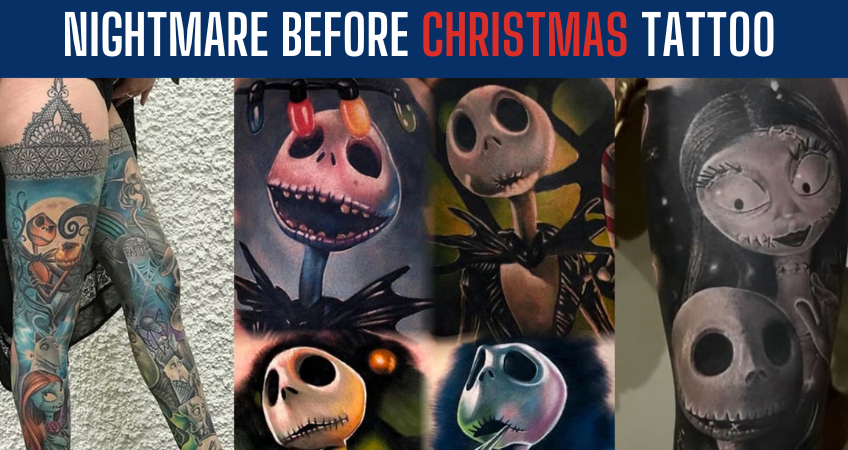 Introduction: The Origin of Nightmare Before Christmas Tattoo

People of all ages are familiar with and adore the animated movie The Nightmare Before Christmas. The director is Tim Burton, who is renowned for his frightful horror movies. Additionally, it’s among the top Halloween movies ever made.
Along with a few other Burton classics, the 1993 film is still a fan favorite today. In Halloween Town, where locals are constantly preparing for Halloween and trying to be spookier, the movie introduces Jack Skellington, also known as the Pumpkin King and a beloved figure. Everyone there has a spooky appearance and seems to represent a monster. The main love interest of the movie is a rag doll named Sally who is in love with Jack. The tale starts when Jack experiences a taste of Christmas and decides he wants to take over the holiday since he notices that the kids all love Santa Claus rather than being terrified of him. He takes Santa hostage, which leads to a string of disastrous incidents that spiral out of control. You can understand why this movie is still so adored by so many by adding amazing antagonists like the bug-filled Oogie Boogie and other beloved characters. These fantastic tattoo designs inspired by The Nightmare Before Christmas are perfect if you, too, are a fan. If you are an admirer of The Nightmare Before Christmas, you must check out some of the amazing Nightmare Before Christmas tattoo ideas shared in this blog.

Tattoo lovers can have a tattoo of Jack Skellington in black and white on their arm that features a shaded image of Zero soaring in front and a lot of dark ink on Skellington’s outfit. The sole colored portion of this tattoo is a buttoned, red nose, making both of these characters the primary focal point.

This tattoo covering the entire arm is detailed by this intricate, vibrant work of art. A tattoo that clearly took more than six sittings expresses color, detail, and a love of The Nightmare Before Christmas. Based on the color, facial expression, or background, every square inch of this work conveys a different tale and a different feeling.

A stunningly realistic tattoo on the bicep or shoulder cap depicts Jack Skellington and Sally in a seemingly romantic pose. A black and white tattoo of Spiral Hill and what appears to be a wedding chapel are filled with affection

We offer the ideal solution for those with evil minds who prefer villains to heroes. Oogie Boogie is the film’s main antagonist. Oogie Boogie is an insect-filled burlap sack with a fondness for gambling. He makes the decision to gamble with his life after Lock, Shock, and Barrell bring Santa Claus to him. To complete his redemption narrative, our antihero Jack ultimately saves both Santa and Sally. However, Oogie Boogie continues to rank among the finest Burton villains. Oogie Boogie’s gaming enthusiasm is evident from this tattoo. The faces of Lock, Shock, and Barrell can be incorporated into a tattoo. Or you may get a Dr. Finklestein and Oogie Boogie tattoo as he is one of the antagonist characters in the movie. 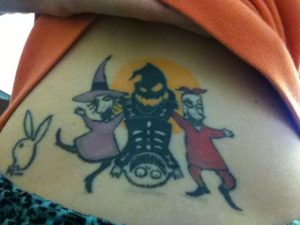 Simple nightmare before Christmas tattoos is for you if you would rather have a smaller design than a larger one. This Jack Skellington facial tattoo in black ink is quite understated. For those who prefer very straightforward and uncluttered designs, this is the ideal look. If this is your first tattoo, it is also ideal for you because a tattoo this small will pain much less. If you’re a lover of Sally, you can also get a tattoo of her face. Alternatively, you could get a tattoo of one of the movie’s interesting antagonists.

Without a couple’s tattoos, the list would not be complete because this film truly is an ironically romantic masterpiece. You already know how Jack and Sally are related, therefore you know why they would make the ideal couple for a tattoo. The size of this tattoo is slightly larger. One can have forearm-spanning half-sleeve tattoos or the smaller, more straightforward tattoos of these two instead of a half-sleeve. If your companion likes Tim Burton’s films as much as you do, this would make a wonderful couple’s tattoo.

One of the film’s most adored characters is Zero the dog. He’s Jack’s ghost dog, and he’s so cute. He resembles a dog wrapped in a sheet, but because he is a ghost, he is perpetually in the air. This Zero Nightmare Before Christmas Tattoo is ideal for you if you’re looking for a discreet and adorable Nightmare Before Christmas tattoo. People who enjoy the movie will absolutely adore the colors and other charming details in this.

One of the earliest tattoo subcultures to gain popularity in the United States is American Traditional. You can get a Jack Skellington tattoo if you enjoy the style’s strong black lines and vivid colors. It includes Jack as well as some additional components that are typical of the American Traditional design, such as a rose and some foliage. To better fit the theme, though, you can request that your artist replace them with a jack o’ lantern. Any character you like can be inked in this style.

In a colorful display, Zero can be tattooed. He is best described as Jack’s ghost dog. Along with his distinctive and recognizable red button nose, Zero’s empty torso is enhanced by the use of simple lines.

The distinctive design and eye-catching colors of watercolor tattoos have made them extremely popular in recent years. If you’re looking for a colorful and amusing tattoo, the watercolor Jack Skellington design is definitely ideal. The tattoo design definitely reveals a different aspect of the character. The same technique can also be used to create a lovely Sally tattoo. Sally and Jack both have quite intriguing character concepts. The other characters are also all extremely beautifully made, and you can always have a tattoo in this pattern of any of them if you desire one.

11. Sally in Jack’s Arms Together Blended in With Spiral Hill

The vibrant and colorful bicep tattoo features Jack and Sally as its main subject matter, posing as though they are on Spiral Hill, but there is a small twist. They have Spiral Hill in front of them, but it is evident that they are not standing on it; it is merely a wonderful addition to the front of the tattoo that completes the design. 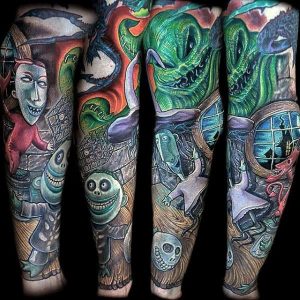 These tattoos don’t really depict much of Jack Skellington’s stay in Christmas Town. In this intriguing tattoo, Jack is depicted with a lengthy beard, much like Santa Claus, and is dressed in what would be considered a Santa outfit. Zero might even be considered one of his imagined reindeer! A little, straightforward piece with a highly original twist.

Undoubtedly, the film features a large number of characters with beautiful designs. There are tricks or infamous handlers who assist Jack in kidnapping Santa Claus, among them Lock, Shock, and Barrell. They have a significant part in the film, and we have some options for you if you want to get these three inked. This tattoo will be the ideal addition to your collection of spooky tattoos because it features all three of them in all their spooky charm. This tattoo design is ideal for you if you enjoy this movie.

Some of the most recognizable movie characters ever created appear in Tim Burton’s Nightmare Before Christmas. Of all the characters, Jack Skellington has one of the most iconic faces. He is highlighted in this post in all of the unique and astounding ways that others have altered his image to suit their own purposes. Everyone is attempting to communicate their own version of his story, whether it be through a work of art or something as straightforward as the image of his circular face. Everyone experiences the Nightmare Before Christmas in a unique way. Perhaps Zero, Oogie Boogie, or the romance between Jack and Sally were to be thanked. Each person who chose to get the nightmare before Christmas tattoos with the Nightmare Before Christmas theme used these figures to express a part of their own unique tale.